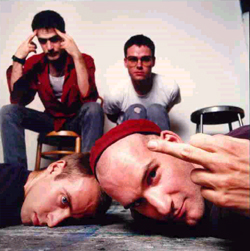 History: Fugazi formed in 1987 in Washington D.C. Nearly all of the members had played in and grown tired of the hardcore scene, and yearned to make more "experimental" music, but still maintain their attitude and passion. Following the dissolution of the seminal hardcore group, Minor Threat, singer/guitarist Ian Mackaye delved into various projects (Embrace, Egg Hunt, Pailhead) but none seemed to last more than a year. In 1986, Mackaye and former Dag Nasty Drummer and Bass player, Colin Sears and Joe Lally, respectively, formed a trio. Sears was then replaced by Rites of Spring Drummer Brendan Canty. Next, Canty's old band mate Guy Piccioto joined the group after attending all their practices and secretly desiring to jam with the boys. Piccioto initially was only a singer, but following the first tour he joined Mackaye on guitar. In 1988 and 1989 Fugazi released their first two EPs, Fugazi and Margin Walker (these two were later mashed together as the band's first official LP). The next year Fugazi gained substantial attention with their (technically) first studio album, Repeater. The record sold over 100,000 copies in its first year, a feat unheard of in underground music; especially for a band whose only promotion was mere "word of mouth." For the next twelve years, Ian, Guy, Brendan, and Joe achieved moderate "commercial" success whilst remaining true to their DIY ethics ($5-$10 admission for concerts, booking their own shows, no merchandise, etc.).

Genre: Whatever; some music critics and fans have described them as "post-hardcore" and "Indie Rock." I think its safe to say, Ian would simply call them Punk rock.

Musical Style: Their music was heavily rooted in the hardcore scene of the late 70s and early 80s (see above). Ian initially envisioned the band to be "The Stooges playing Reggae." Fugazi incorporated various styles/genres into their sound: Funk, Reggae, Dub, Punk, hardcore, classic rock, and others. As wikipedia claims "Notable is MacKaye and Picciotto's inventive, interlocking guitar playing, which often defies the traditional notion of "lead" and "rhythm" guitars. They often feature unusual and dissonant chords and progressions filtered through a hardcore punk lens."

Influenced: Anti-Flag, Rise Against, The Warmers, The Evens, The Red Hot Chili Peppers and others.